The availability of charging infrastructure is a significant factor when consumers make purchasing decisions regarding plug-in electric vehicles (PEVs). While most PEV charging occurs at home, less than half of US vehicles have a dedicated parking space at an owned home where a charger could be installed, limiting home charging installation and, potentially, PEV ownership. Public charging is used less frequently, but it provides important assurance to BEV drivers, encourages them to fully utilize battery range, and alleviates range anxiety. Therefore, adequate access to public charging will likely affect consumer acceptance of PEVs. 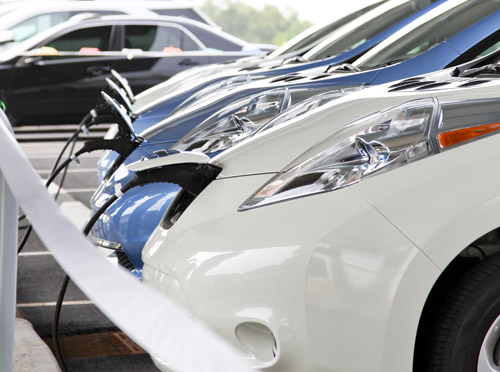 These datasets describe 890,980 trips by 10,473 drivers at various times between 2004 and 2012. The raw GPS data was aggregated to the trip level for each region. While the analysis is based on travel activity data collected from survey participants driving conventional vehicles, it was assumed that the drivers' travel patterns will not change when driving PEVs.

This study looks only at public charging. Therefore, the data was mined for trips that meet the following criteria:

The study defines charging opportunity as the probability of encountering public charging stations at public trip destinations. It reflects the degree of overlap between the charging network and a driver’s activity space, excluding trips to the home or workplace. Charging station placement was determined using a heuristic method that places stations in grid cells with the largest number of public trips that have them as a destination.

In both approaches, only public stops (not home or workplace) with dwell time longer than half an hour were considered. 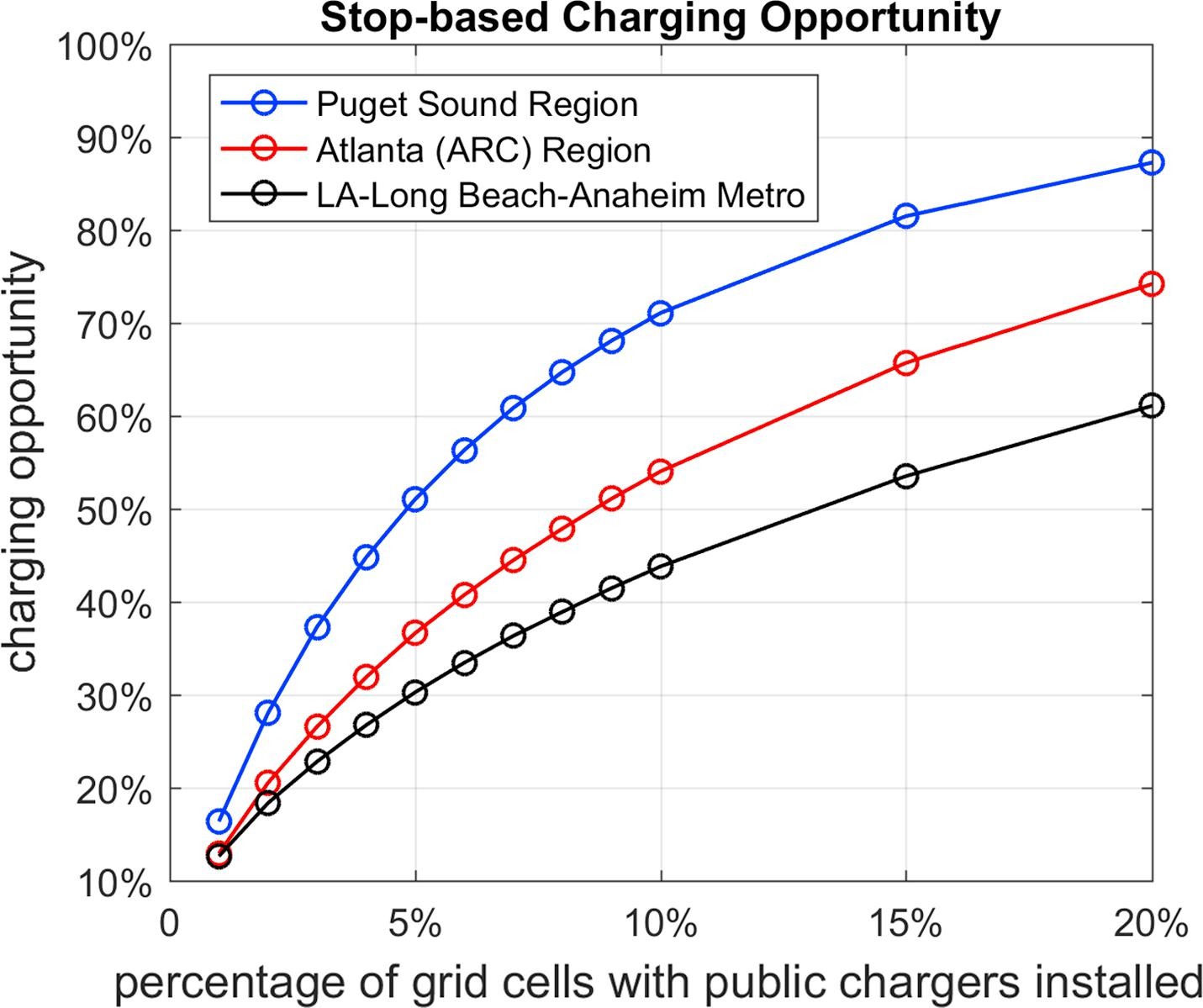 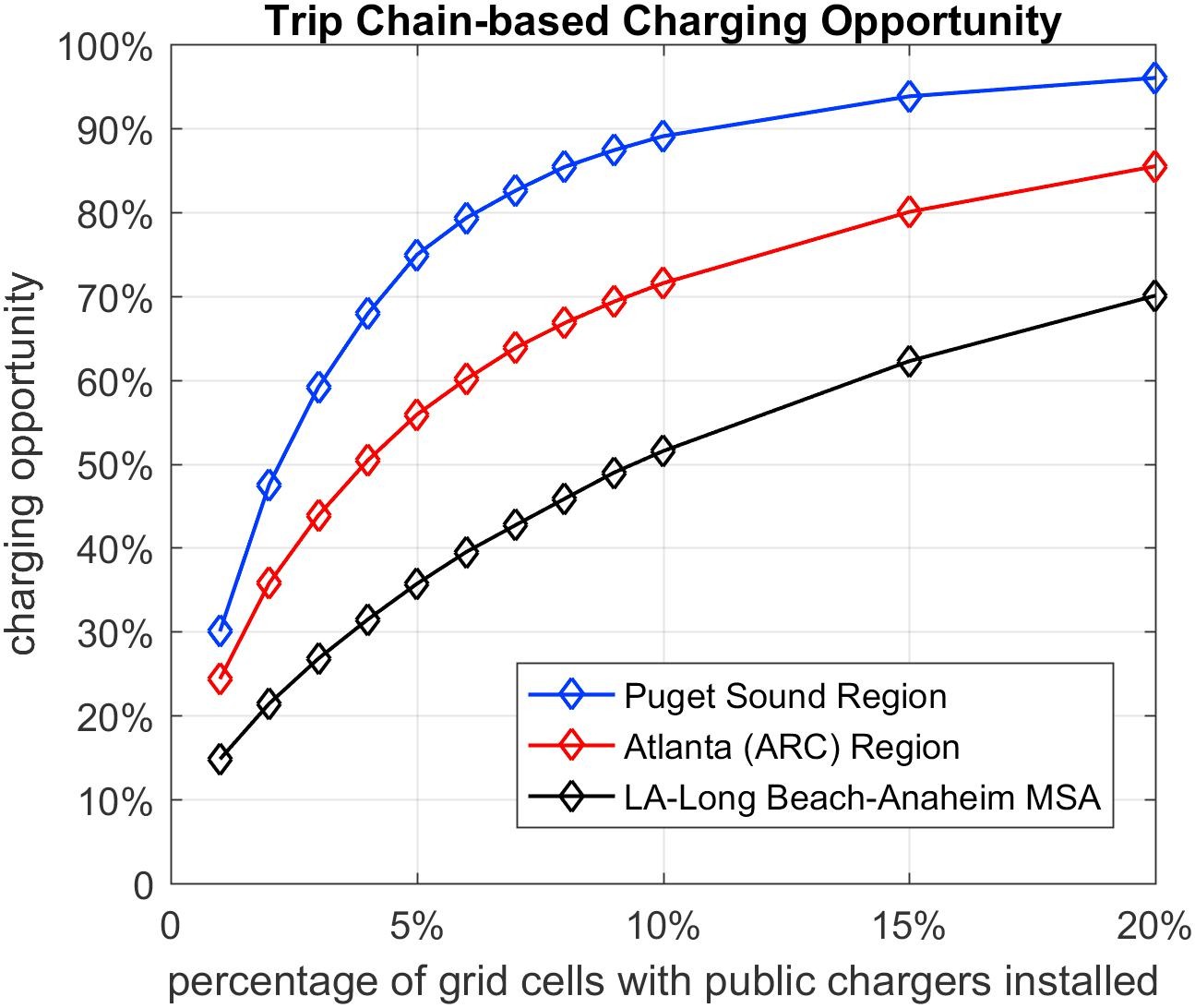 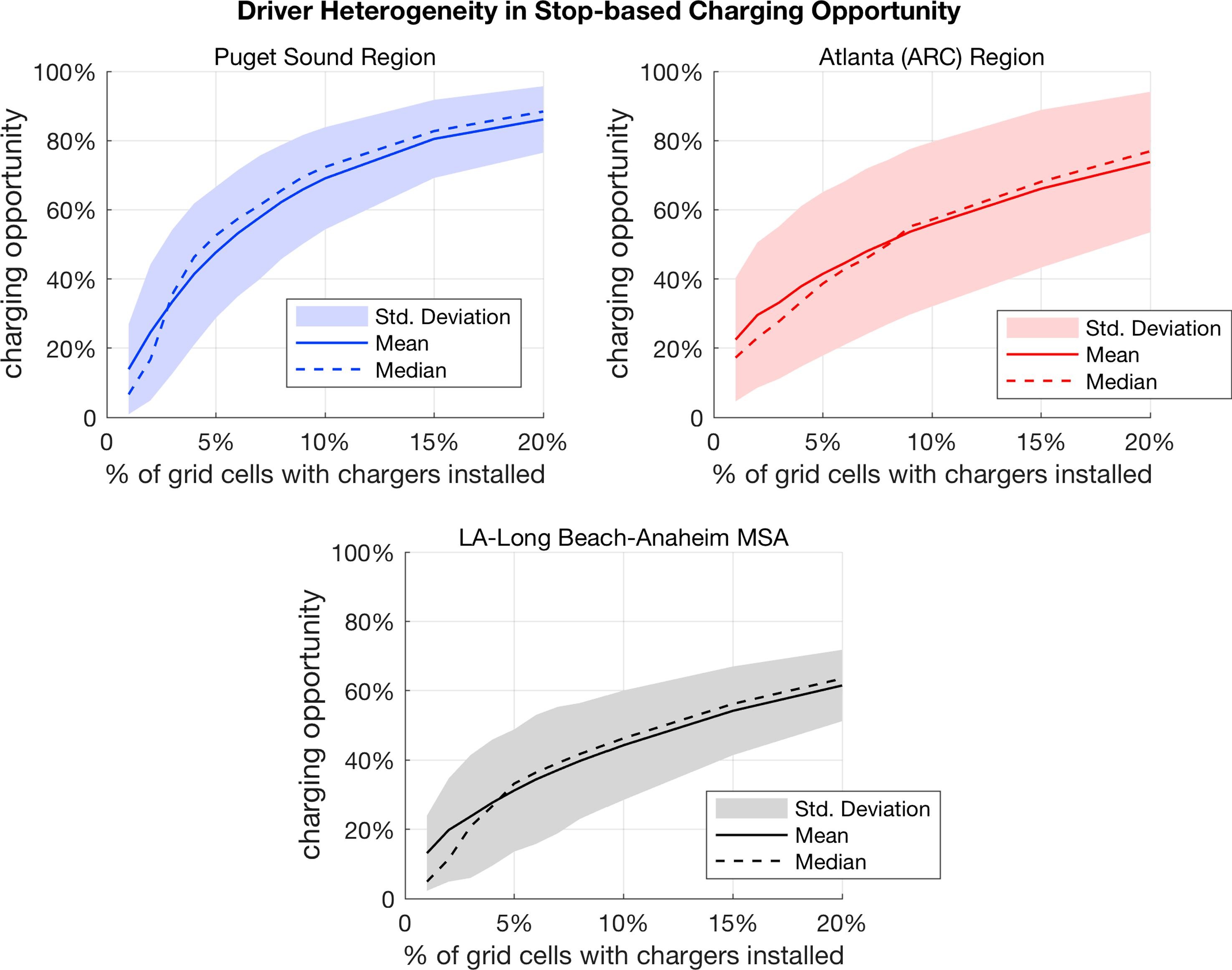 Fig. 3. Driver Heterogeneity in Stop-Based Charging Opportunity
The graph shows that driver heterogeneity is greatest for the Atlanta region, followed by Los Angeles-Long Beach-Anaheim region. The Puget Sound region has the least heterogeneity. 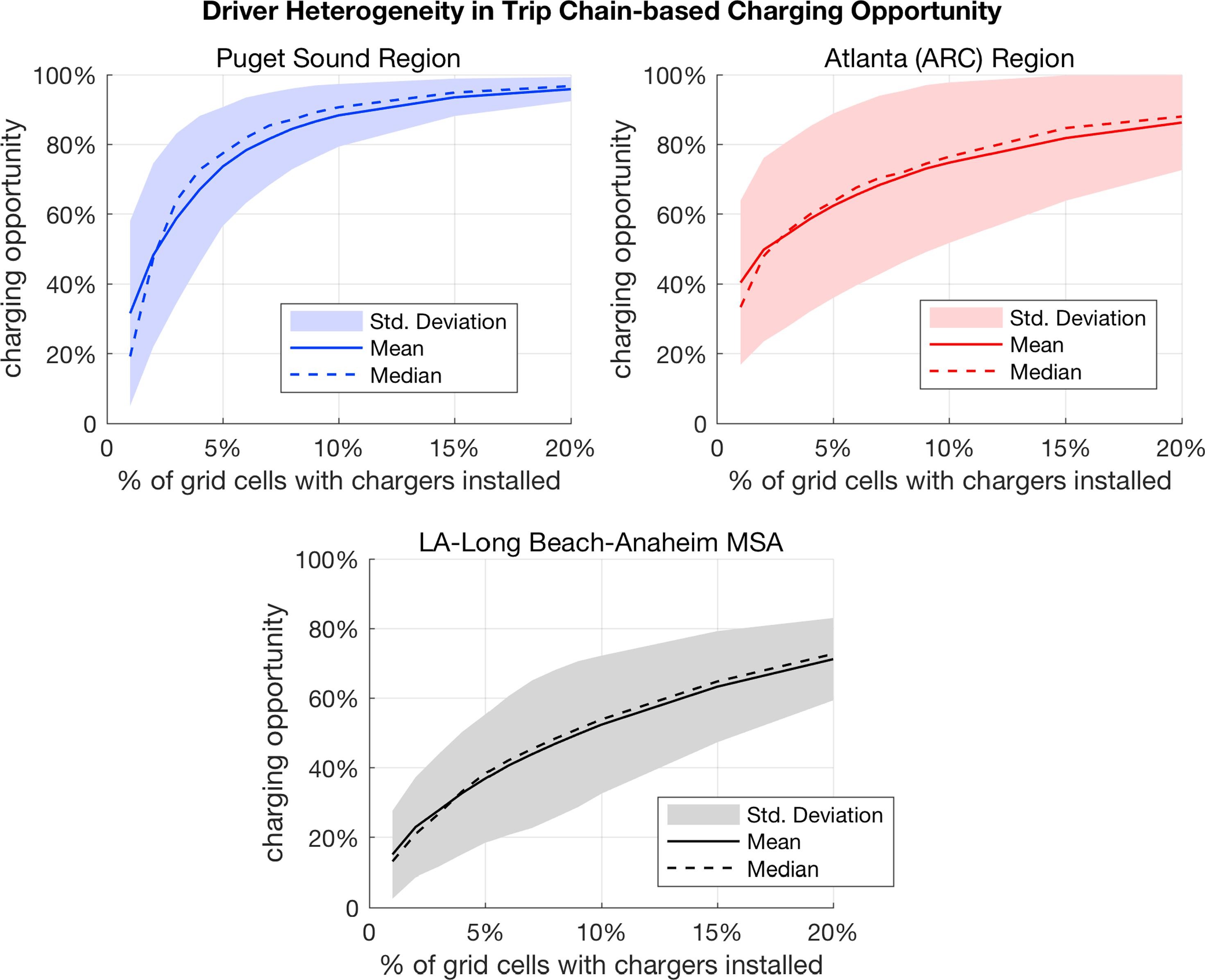 Fig. 4. Driver Heterogeneity in Trip-Chain-Based Charging Opportunity
The graph shows that driver heterogeneity is greatest for the Atlanta region, followed by Los Angeles-Long Beach-Anaheim region. The Puget Sound region has the least heterogeneity.

This study does not explicitly examine network coverage and charging opportunity in relation to charging needs. However, it does analyze charging opportunity weighted by travel distance, which may reflect charging needs to some extent. This analysis framework weights each stop by the distance of the associated trip, ranks grid cells by the number of distance-weighted stops that fall within each cell, and places a charging station in the top % of cells.

Fig. 5 shows similar trends as in Figs. 1 and 2 but with lower charging opportunity levels achieved for both metrics presented compared to the initial case. As expected, the initial travel approach is more efficient in providing charging opportunity when installing charging stations in the most popular places. By contrast, the travel-distance-weighted approach factors-in charging needs by giving more weight to places that are less popular but may be essential for meeting some drivers' charging needs. 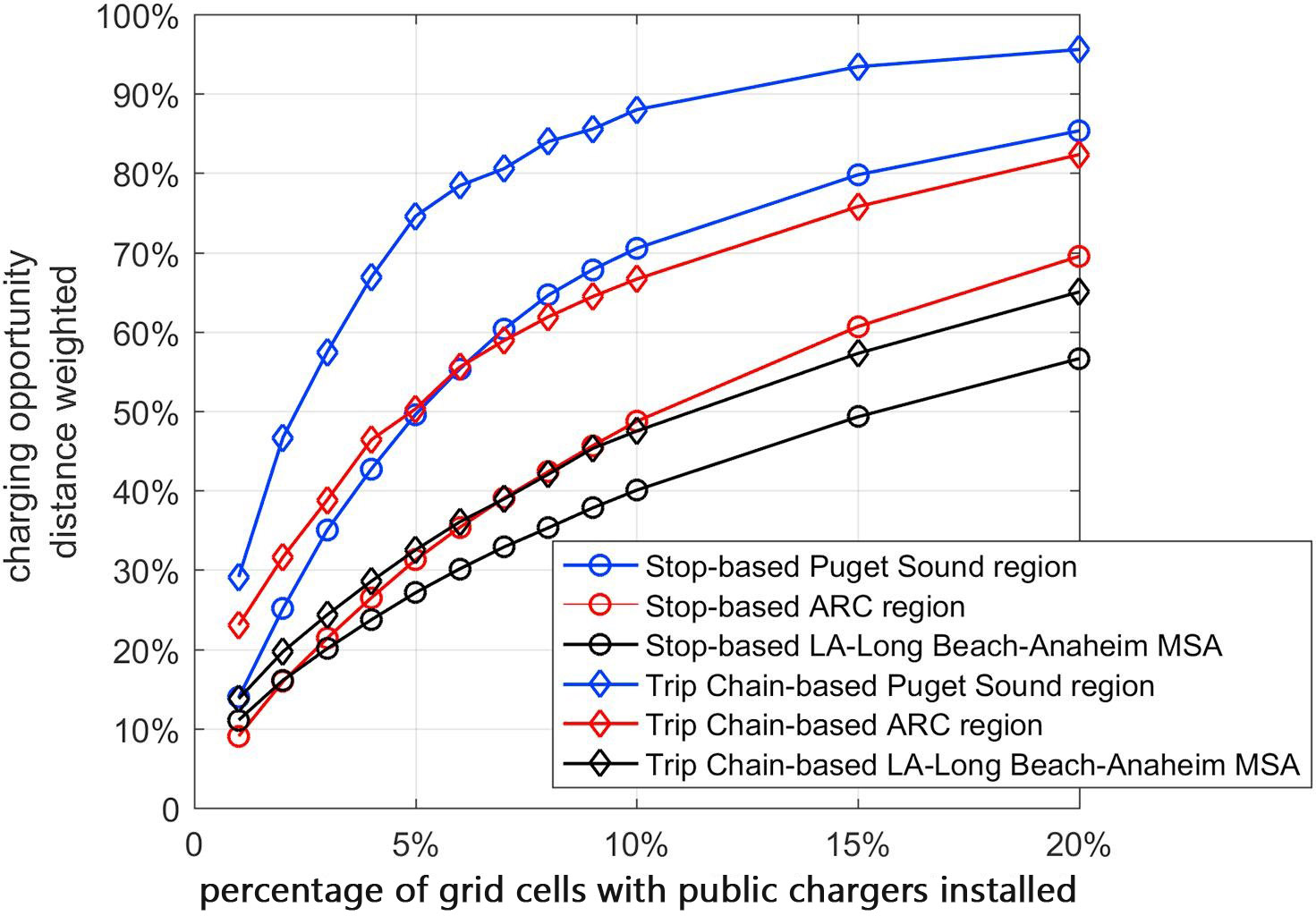 Understanding the relationship between public charging deployment levels and charging opportunity is of great interest to PEV automakers, Electric Vehicle Supply Equipment (EVSE suppliers) and providers, and the government—anyone with an interest in expanding the PEV market from early adopters to the mass market, which might be more sensitive to the lack of public charging. The analysis findings imply that charging networks can be efficiently designed by concentrating charging stations in a few popular places while still providing a relatively high level of charging opportunity although this efficiency can vary significantly by region. The results also show that charging opportunity among PEV drivers within a region vary significantly—the standard deviation in this study ranges from 20% to −20%. Therefore, balancing efficiency and equity in providing charging opportunities would be an important consideration in the public EVSE planning and deployment processes.