China has been the world's largest highway vehicle market for nearly a decade. The total vehicle stock reached over 151 million in 2015, and studies anticipate that China's vehicle stock will reach 400 to 700 million by 2050. It has also become the world's largest market for plug-in electric vehicles (PEVs). In 2015, approximately 191,000 PEVs were sold in China, more than the total sold in Western Europe (184,500) or in the United States (115,262).

The country's rapid urbanization and motorization have led to the typical challenges that accompany explosive growth: air pollution, urban congestion, energy security and other issues. Plug-in electric vehicles could be part of the solution for mitigating air pollution and improving energy security. However, a shortfall in residential parking space for charging infrastructure may make PEVs less attractive to buyers, especially in congested cities.

Home charging is widely considered the most important charging option for PEV adoption, and that requires adequate dedicated residential parking spaces. However, unlike most new car buyers in the United States, Chinese car owners predominantly live in high-rise apartments where parking spaces are usually limited. Even in mega cities with both private and public parking spaces included, the ratio of parking spaces to vehicles is only about 0.8. Understanding projected residential parking space availability as a potential constraint is important to predicting the future PEV demand in China or to addressing such an infrastructure barrier to vehicle electrification.

A recent study by the Transportation Energy Evolution Modeling (TEEM) program at Oak Ridge National Laboratory (ORNL) and Aramco Services Company projects the residential parking availability by province/region and by urban area type in China from 2005 to 2050. The study's goal is to inform researchers, industry, and policy makers in evaluating PEV market prospects in China. Aramco Services Company, the sponsor of the study, has been funding ORNL to study motorization and electrification trends in China and the implications for transportation energy demands.

The study divided China's urban areas into three tiers in 31 provincial regions in mainland China based on their administrative partitions by the Chinese government.

Residential communities were then segmented into four groups based on construction year.

The study collected residential community information covering over 100 cities across the 31 provinces from the largest internet real estate transaction websites in China. This data was used to estimate the impact of residential parking on PEV ownership. The study is described in detail in Estimation of Vehicle Residential Parking Availability in China and Quantification of Its Potential Impacts on Plug-in Electric Vehicle Ownership Costs.

Results show that the weighted parking availability is projected to improve significantly across the nation between 2005 and 2050. However, there are noticeable differences among regions/provinces. For example, some provinces that experienced urbanization prior to the motorization boom in the early 2000s, such as Heilongjiang and Jilin, have lower parking availability. This is because much of the infrastructure was designed and built without planning for high vehicle ownership rates. In addition, urbanization rates moved slowly in these provinces when their economic growth fell behind that of other provinces.

Second-mover advantage may play a critical role in helping less developed regions. For example, Guizhou and Sichuan provinces are projected to have more parking availability than most provinces. This could be due to second-mover provinces learning from the urban planning experiences of other regions, recent economic growth generating new urban residents and communities, and cheaper land prices making it less costly to build residential parking. 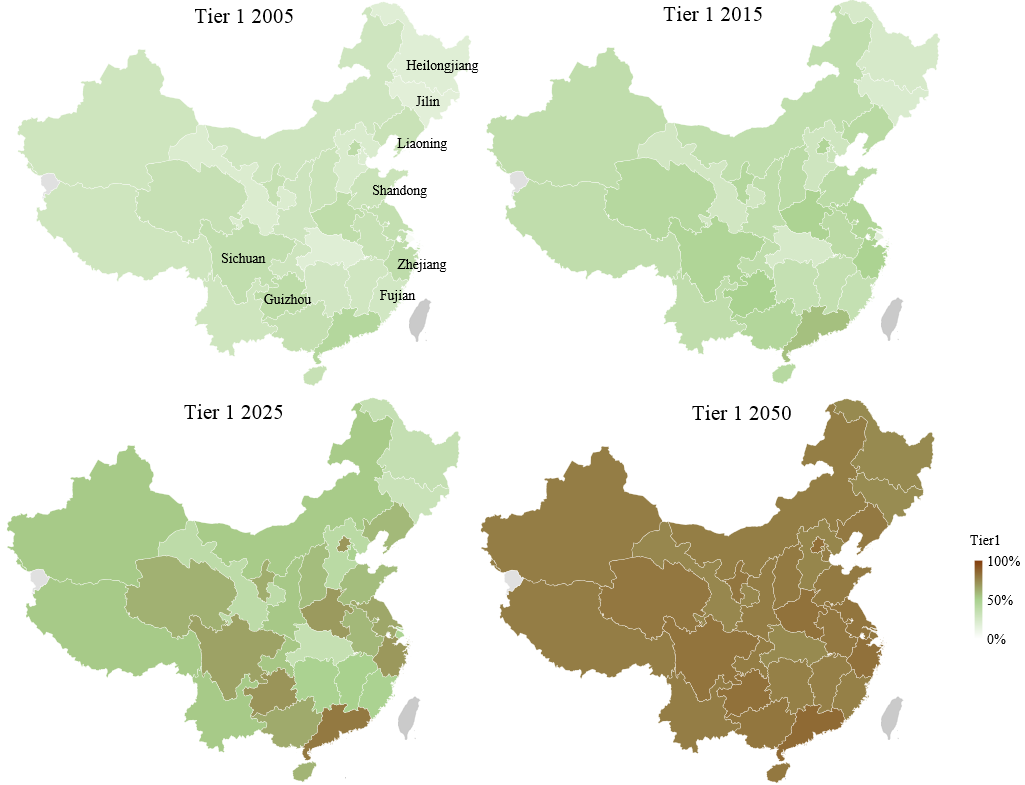 The study estimates the mean shadow value of a residential parking space to range from $2,376 to $10,687 USD, depending on PEV model, with the upper value close to the subsidized price of some PEVs (see graph). For all-electric vehicles, the value is generally greater for those models with a shorter driving range. The shadow value also tends to be greater for all-electric vehicles than for plug-in hybrids, which can operate on gasoline or electricity.

This study has developed a method for projecting home parking availability and quantifying the effects of home parking availability improvement over time on PEV ownership. The study shows that different shadow values by all-electric range (AER) can affect consumer choices between plug-in hybrid electric vehicles and battery-electric vehicles, among different AERs, and even between PEVs and gasoline conventional vehicles.The findings of the study may contribute to a better understanding of

Future studies may include more scenario analysis with respect to land use constraints, urbanization process, PEV policies, and PEV technical progress. Also, a better estimate of the aggregate impact of home charging available should be conducted by linking the method dynamically with a consumer choice model.